Do you know anyone using Pearl's Second Opinion®?

Dentists using Second Opinion gain a second set of eyes to help ensure that they’ve considered most common conditions that appear in their patient’s radiographs.

That assurance comes from the system’s ability to detect signs of most dental pathologies and other treatable conditions commonly found in dental radiographs-including hard-to-spot issues like incipient caries or the early signs of a periapical radiolucency.

Machines are able to perform the same task over and over, without getting bored, tired, or distracted. That means that Second Opinion will deliver the same high-quality analysis every time. ‍ And because it analyzes and instantly delivers results whenever a new radiograph is captured, dentists can count on reliable support in real-time. This instant analysis capability allows dentists to integrate Second Opinion seamlessly into their clinical workflow and benefit from dental AI support when it matters most-while patients are still in the chair.

Second Opinion was engineered to make it easier for dentists to read radiographs and communicate findings to patients.

Between its crystal clear, high-contrast user interface designed to deliver optimal X-ray viewability and its intuitive image adjustment and AI sensitivity and detection controls*, Second Opinion lets dentists to see exactly what they want, how they want-and effortlessly share their findings in a way that patients can easily understand. 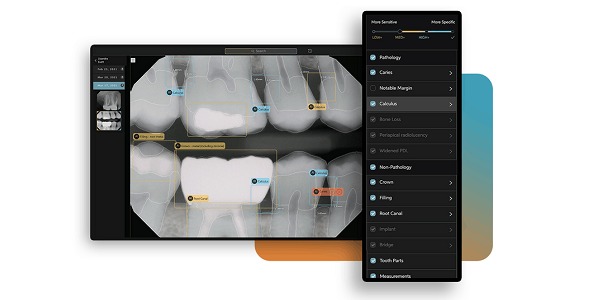